10 Crazy But True Facts About Your Dreams

Dreams are some of the most interesting and fantastic adventures.

Here are ten things you didn’t know about those crazy tangled stories your brain tells you every night. 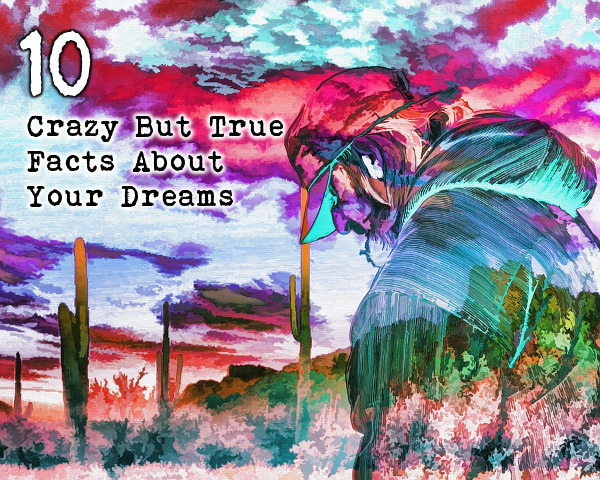 1. What do alternating current and the sewing machine have in common with the periodic table?

These things and more were all inspired or invented during dreams. Elias Howe, the inventor of the sewing machine, got the idea for the needle during a dream in which he was being hunted by crazy tribesmen. Their barbed spears solved a problem he had been having with the needle on his machine.

2. Some people dream predominately with sound.

People who were born blind dream very engaging and interesting dreams. Their dreams contain no visuals though and rely solely on sound, touch, smell and taste to tell their tales. However, people who become blind still dream with images.

70% of the characters in men’s dreams are men. Women dream in an equal 50/50. Men’s dreams also tend to be more violent, while women dream of more peaceful activities.

4. Dreaming is a major portion of your life.

The average person spends 6 years of their lives dreaming during their 25 years of sleep. Most dreams are forgotten upon waking.

Toddlers don’t start being the main character of their dreams until the age of 3 or 4 years old. Until then their dreams have no central point of view and are a series of events and actions from no particular perspective.

6. Not everyone dreams in color.

7. Nightmares are real for some.

Sleep paralysis is the condition of waking and being unable to move. It is also often accompanied by visions of dark demonic clouds above the person or sometimes voices and strange figures in the room. Unanimously these are felt as dark and evil presences that leave the waking person feeling a sense of dread.

8. Some of us can only be artists in our dreams.

Lee Hadwin is a nurse by day. By night Lee suffers from a unique form of sleep walking called “sleepdrawing”. He makes beautiful and intricate portraits and wakes up with no recollection of doing so in the morning.

9. Studying til dawn may not be the best way to pass that test.

Learning information just before sleep helps it sink in better than any other time. Sleeping just after studying greatly improves retention.

The people of Fu-Kein believe that sleeping on the graves of dead ancestors can give them revelatory dreams.